Some weeks ago I joined a new team. I don’t like causing disruption but I do like to get the pace of improvement going on my teams. Here’s how we started out together…

During my first week I observed my new team’s activities. They were trying hard and doing pretty well but hitting some hurdles. Their most obvious challenge was the impact of covering support activities and cleanup tasks in addition to new story delivery.

Other than the loss of expected delivery capacity, this unplanned work was causing problems during stand-ups. The flow and continuity of useful conversation was being lost as the team stopped to hunt around for the right coloured super-stickies, a working marker pen and figuring out where to put the tasks. (but… they were aiming to get these tasks visible!)

Borrowing some 5S tricks from Lean, I started work…

Each team I’m working with is establishing their own natural, effective way of working within a common framework. I don’t believe seeking further standardization is something that will help them right now. (Although I’ll be setting up a community of practice for sharing successful and failed ideas shortly).

We added a small new change to our board, stand-up and/or tracking every day over a week – generally this involved scissors, tape, markers and old cereal boxes!

We reviewed & cemented the successes and added a couple of bigger changes during our retrospective.

Here’s the current result. – I’ll post a photo in future (I’m writing this at home on the weekend). 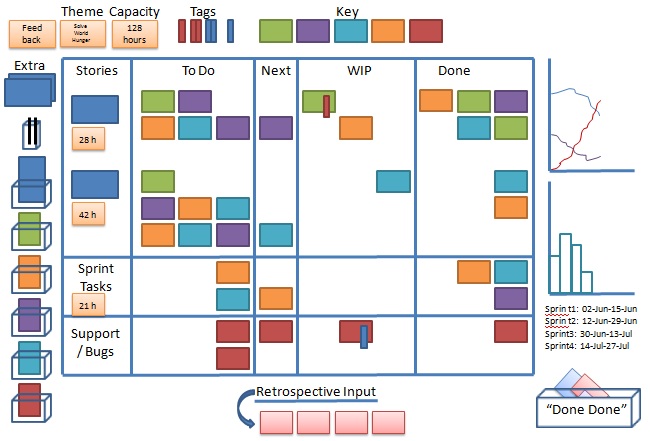 The great thing with this team is that all stakeholders are on-site and easily accessible. Having faced a painful hurdle on their previous sprint with a story that turned out to be significantly harder than expected, they discussed and adjusted priorities with their sponsor.

They pulled the part-completed story off the board, moved it right down the backlog and picked up something cheaper.

The team completely reset their board at the end of the sprint – even with work started or planned but unfinished – just to remove all the noise.

Interesting (but obvious) side-note – Perceived value is influenced by perceived cost. If something looks too expensive, previously less-valuable items become worth discussing and implementing.

IF the team were going to continue unfinished work, they would re-evaluate the remaining and  completed tasks, understand why they didn’t finish, learn and re-plan appropriately rather than assuming what’s on the board was correct.

Longer-term, I’m expecting this approach to also encourage more flow/pull-scheduling of stories. I’m aiming for us to only pull new stories onto the board when there’s a to-do slot free.

Finally I stepped back for a while to let the team self-organize and see if they could sustain the changes (a trick from my friend Carl).  About 80% of the changes have stuck with no support needed. Progress tracking and clearing the board down have needed some revisits. There were specific causes for these falling over but they’ve been recognised, addressed and are back on-track again.

In Part 2 I go into more depth on each of the areas of the board, what they do and most importantly why use them.